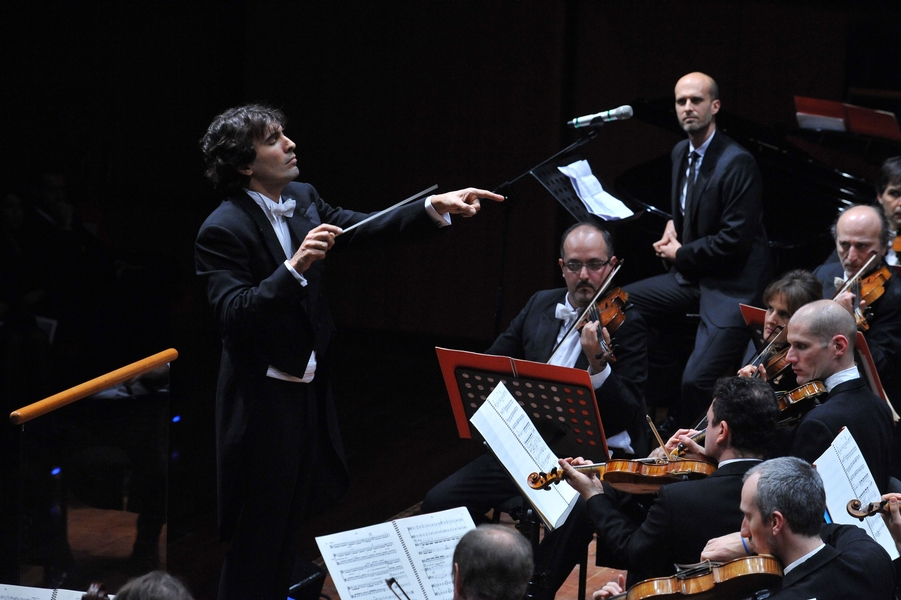 Ponti debuts new orchestra at Lincoln Theater
“[The Los Angeles Virtuosi] orchestra is an ensemble that emphasizes music education and giving back to the community. In fact, the orchestra gives 100 percent of its net revenue from subscription performances to the advancement of music education. (...)

“From the opening pulse of cello strings to the gentle, rising tension from the violins, to fluidly sweeping passages and pizzicato with precision, Ponti and the orchestra captivated the audience. Under astute direction the orchestra played with the cohesion of a seasoned ensemble. Its performance garnered enthusiastic applause and a standing ovation...

“The concert concluded with a delightful version of the lively Neapolitanskaya pesenka (Neapolitan Song) by Rimsky-Korsakov that left the audience wanting more.”

Opera Gala provides a grand finale for Festival del Sole 2014
“...maestro Ponti led the Sphinx Symphony Orchestra in a series of opera preludes, emphasizing the dark brass and heavy timpanic thunder for Verdi’s ‘Rigoletto’ and then in contrast, the light, transparent strings for Verdi’s ethereal opening for ‘La Traviata’... never during this festival had this orchestra sounded so powerful, the strings so full and rich and the brass so clarion as Ponti was able to elicit for Bellini’s overture to ‘Norma.’ What is often heard as just a lot of clangor (Bellini was criticized for the work being too noisy) here became an exciting interplay between the resonant woodwinds and the vibrant celli. It was a thrilling performance. Likewise the rendering of Puccini’s delicate ‘Crisantemi’ (Chrysanthemums). While chrysanthemums are usually a part of an Italian funeral bouquet, Ponti was able to weave a spell of fragile beauty and loveliness. This maestro is a true master, often getting power and nuance in equal measure from his players with a modicum of gesture (...). The effects are often eloquent as well as startling.”

“The monumental Sala Nezahualcoyotl served as backdrop for the musical talent of the Orquesta Sinfonica de Mineria under guest conductor Carlo Ponti. The program included interesting works such as Sinfonia India (Chavez), Bolero (Ravel), Huapango (Moncayo), Danzon No. 2 (Marquez)... I was impressed by the freshness and subtle intensity with which Carlo Ponti led his orchestra. He conveyed an attitude of assurance and discipline, combined with the warmth of a leader that notices and appreciates the dedication of his ensemble.... Enough said that I shed a few tears during the reading of maestro Moncayo's masterwork and departed the event with an obvious smile from my joy and emotion.”

“Under the direction of Carlo Ponti, the Russian National Orchestra’s performance was warm and opulent, with gorgeous textures. Dvorak had a talent for composing beautiful, energetic, great melodies, and the Seventh Symphony is full of them. Ponti and the responsive orchestra showed us this. Strings in the third and fourth movements sang gloriously; the woodwinds and brass were exquisite. The balances between the instrumental sections and the tempi were for my taste ideal. Ponti and the orchestra gave us a rousing closer — a lyrical, passionate performance.”

San Bernardino Symphony delivers a big, bold program
“Planets and stars neatly lined up for the San Bernardino Symphony Orchestra's season-ending concert Saturday night: exciting and accessible programming, outstanding musicianship and commanding leadership by conductor Carlo Ponti came together for an invigorating concert that truly celebrated the best of American classical music.... [In Copland's Third Symphony] Violins played big and strong, clean and articulate... lean and finely expressive... Percussion, led by powerful bass drum and by Bruce Anderson on five timpani drums, powered the work, especially the huge final movement (...) Horns and brass, spectacularly insistent, open, and unconstrained, drove the second movement that erupted like a summer sunrise on dawn's evocative quiet. The fourth movement, which evolved sweetly with a flute statement of the "Fanfare [for the Common Man]" before becoming all brass, all percussion, was all goose-bump time. “Wow,” say my notes, more than once...”

A fine debut for Ponti
“The Neapolitan public filled the RAI Auditorium in Naples to maximum capacity for the third performance of the Orchestra del Teatro di San Carlo’s orchestral season featuring young musical talent Carlo Ponti Jr. as the lead presence on the podium. [Nothing] could obscure the evening’s atmosphere... [The concert] concluded with Brahms’ marvelous Second Symphony, a work in four movements adhering to classical form in which the young conductor managed to express his best qualities.”

“[Carlo Ponti] is a conductor of uncommon musical sensibility, genuinely prepared when it comes to extracting [orchestral] timbres, melodic details and harmonic profiles... In Puccini’s youthful Capriccio Sinfonico he effectively brought out the contrast between the work’s operatic and instrumental roots with a careful balance between solo and tutti textures (the principal cello’s melodic line was as beautiful and effective as was his close interaction with the concertmaster). Lastly, Brahms’ Second [Symphony], which Ponti conducted from memory, featured commendable expressive qualities such as the beautiful sound of the first horn or the melodic and rhythmic nuances of the winds [and] brilliant brass.”

“Impassioned from the first notes, the strings delivered big, sweeping lines in the second movement [of Sibelius’ Symphony No. 2], furious and articulate expressions in the third movement and full-powered depth in the spectacular fourth movement. With its simple six-note motif and Ponti’s carefully considered tempi, the fourth movement, in this performance, became goose-bump time.”

“The performance [of Beethoven’s Ninth Symphony with the Napa Valley Symphony] brimmed with vitality throughout, yet was also exceptionally lovely in its quiet moments... Ponti’s broad tempos resulted in a beautifully articulated rendition — outstanding for its interpretive integrity as well as lofty level of execution. Clearly Ponti was not afraid of facing the visionary qualities of this music. In the finale, he benefited, too, from an outstanding quartet of soloists...and a warmly robust choir... The musical achievements of this work proved outstanding in maestro Ponti’s capable hands.”

“... thanks to the musical sculpting talents of conductor Carlo Ponti, Monday’s concert might best be described as a magical experience... Credit must be given to Maestro Ponti for the Russian National Orchestra’s technicolor sound on the Russian works. The orchestral accompaniment on the Prokofiev Third Piano Concerto was as brilliant as the efforts of the soloist. This was a romantic interpretation, devoid of the bombast that often winds up in live performances of the Prokofiev Third. The reading was emotionally charged, to be sure, but Ponti held the reins, integrating all the parts... Ponti and the Russian National Orchestra offered an electrically charged reading of Mussorgsky’s Pictures at an Exhibition... rife with vivid strokes of orchestral color... Ponti let the work unfold naturally, eschewing virtuosity for the music’s pictorialism and atmosphere.”

“The superior quality of [Napa Valley’s 2006] Festival del Sole continued undiminished this past Wednesday with splendid performances by bass Samuel Ramey, mezzo-soprano Frederica Von Stade and the Russian National Orchestra under the baton of Carlo Ponti Jr... The second half of the program was dedicated to Tchaikovsky’s challenging Fourth Symphony... This was not a casual strumming of the instruments, but an incredible series of staccati in great dynamic range from the very soft and delicate to the bright and forceful. It was interesting to observe maestro Ponti... The musicians were taut with attention... sitting on the edge of their chairs, responding to every given command, and deeply respectful. The results have been repeatedly thrilling. Ponti, incidentally, conducted the Tchaikovsky without a score, a musical tour-de-force for such a complex piece.”

“Ponti conducted without score, drawing a lively and fresh performance from the musicians... As guest conductor with the Winnipeg Symphony Orchestra, he had given his all, seeming to feel every note, every phrase, while maintaining a high level of involvement from first note to last.”

“It was the test of fire of his career, his Italian conducting debut with one of the best Italian orchestras [Orchestra del Maggio Musicale Fiorentino]... Ponti rose to the challenge with dignity... His demeanor is controlled and he abides to the musical text... Tchaikovsky’s Fourth Symphony — the evening’s most significant work and a test for the young conductor’s abilities — offered effective musical phrasing punctuated by sudden chromatic shifts. The strings performed thematic passages with transparency, the brass [played] with a powerful sound and all instrumentalists outlined with clarity the genial musical inventions of the third movement.”

“The Teatro Comunale’s [Florence] symphonic season opened with the Italian debut of Carlo Ponti Jr... The public was particularly numerous, well disposed and didn’t skimp on the applause. Rossini’s Barber of Seville Overture unfolded itself with neat elegance... The thunderous performance [of Tchaikovsky’s Fourth Symphony] earned Ponti an intense and prolonged ovation from the audience.”

“Audience members could readily identify an unprecedented charge of adrenaline with which Ponti effortlessly imbued the music. This Scheherazade turned out to be a mercurial reading that exuded assurance and commitment... this blend of compelling melodies and orchestration was one of the best... ever heard... Ponti managed to be narrative in his conception of [Tchaikovsky’s Romeo and Juliet] with clear, well-defined orchestral textures... The maestro fired up the Russian orchestra to a fevered pitch of inspiration, summoning a luxurious sound and color that ranged from brass chorales as rousing as Judgment Day to imaginatively sprung wind solos... one of the finest performances of the year, to be sure.”

“Ponti projected an excellent rapport and spirit of collaboration with his [Russian National Orchestra] musicians and his audience, and both responded in kind with great enthusiasm. There is no contrived aestheticism in his leadership. His conducting is clear, precise and expressive. Every gesture was geared to anticipate character changes in the music and to give the players what they needed.”

“Conductor Carlo Ponti Jr. displayed some understated star power on the podium... [The Russian National Orchestra] rose to excellence in Mussorgsky’s Pictures at an Exhibition, where passages... were rendered with razor-sharp accuracy, and the brass section turned brass into gold.”

“He displayed a facile grace, a keen sense of timing, a marvelous use of orchestral color and a sublime restraint that made the program sing and soar... He’s the real thing, a remarkably fine young conductor who could become one of symphonic conducting’s superstars in the not too distant future.”

“[Carlo Ponti’s] conducting... was a reminder of the wonders of music-making.”

“[Ponti] worked confidently from memory... [The American Youth Symphony’s] principals gave him passages of real glory, and the strings have seldom sounded richer... He opened with a propulsive [Wagner] Prelude...extroverted in spirit and grandly played.”